Ever since last winter, I’ve been warming up to the idea of moving somewhere warmer. As a disabled person over the age of 30, my options are pretty much limited to Canada, which isn’t very warm.

My issue with Montreal isn’t that French is the primary language. I can read French well enough to get by; I just can’t seem to dress warm enough to get through another winter.

There’s Vancouver with an average high of 22C in the summertime, and average low of 6 in the winter months. But Vancouver is expensive. I know it’s not London, Tokyo, or San Francisco, but since leaving just 3 years ago, the cost of rent has gone up a LOT. When I moved out of my one-bedroom in the Fairview neighbourhood, I found it listed at $250 a month higher than what I had been paying. Similar places are now going for $1,600+/mo. Also, it rains a LOT there.

Next, we have Victoria with even milder temperatures and slightly less rain. Rent is a little less shocking. The size of the city is perfect: it has that small-city feel with all the big-city amenities. Plus, Tammy lives there, along with an unusually high number of cotton-headed coffin dodgers, but that’s okay because with my hair the colour it currently is, they’d likely accept me as one of their own kind.

When I left Tammy in Victoria on Tuesday the 17th, I was transported three hours up the island by a dear Deaf friend, Alana. I’ve known Alana since the 1st grade and she was probably my closest friend (distance-wise as well as she lived a few blocks away) in my early teens. She was the type of friend who mostly just wanted to do fun stuff like rollerblading, cycling, table hockey, driveway hockey,  and video game hockey (ok, not video game hockey, but we did play lots of Snoopy’s Silly Sports Spectacular and Chip ‘n Dale Rescue Rangers on her NES).

She moved to Ontario after high school and lived there for years. Even after she moved back to BC, she was still living very far away from Vancouver. Our reunions were rare.

Although she had been up since 3am that day for a four-hour shift, she drove all the way from Courtenay to pick me up in Victoria because she wanted to show me her new hometown and possibly convince me to be her neighbour again.

Courtenay and the two surrounding towns (Comox and Cumberland) share a very similar climate to Victoria. There’s the ocean! AND MOUNTAINS. Rent is cheaper!

On the downside, there aren’t a lot of places available for rent for most people just own homes. Jobs are, of course, more limited in smaller towns, but with Cumberland being paradise for insular mountain bikers, there is likely an above average per capita demand for bike mechanics.

Maybe Yann and I will end up moving to the Comox Valley with the two cats, our four bikes and then be forced to get really creative with our living space when we throw two mountain bikes into the mix.

But how could I possibly make a decision like that if I had never been on a mountain bicycle… outside of a parking lot. Sure, I know how to fix them, but the sensation of going over thick roots and stones of assorted sizes with a suspension fork was unknown to me. 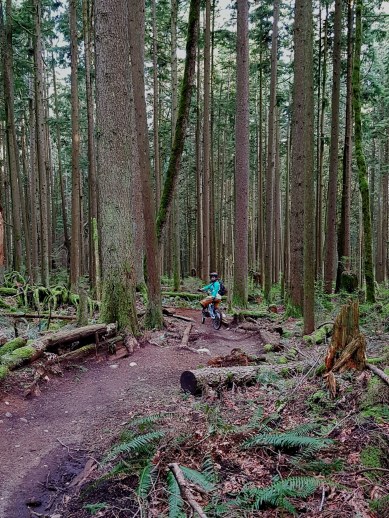 …a short cyclist among giant trees.

I felt compelled to warn her repeatedly that me being a roadie ≠ good at mountain biking. Also, just because I can un-fuck a MTB doesn’t mean I can un-fuck myself while riding one.

Her boyfriend was chill enough to let me borrow his back-up bike. Before we went down the trails of Thornhill in Maple Ridge, Sarah gave me some useful advice such as “No, you don’t really sit down at all,” and “You should totally get a mountain bike.”

The bike I was riding had excessively large disc brake rotors which I had a difficult time modulating especially since both my bikes have rim brakes. Besides, like a true roadie, I ride clipless and had a hard time keeping my feet planted on the flat pedals.

In the end, I don’t think I sucked as badly as I expected to, and I actually enjoyed it more than I expected to!