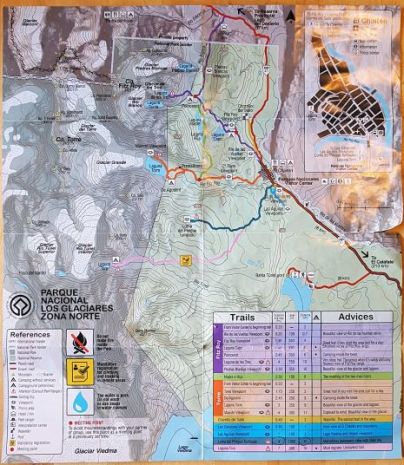 All buses going into El Chalten are required to make a stop at the Visitor’s Centre for an orientation from the park ranger. Instead of listening to the park ranger’s lecture–because I cannot hear–I sized-up the other adventurers. Judging by the brand names on their technical gear, they were mostly European, but I was able to pick out a few Canadians from the crowd. (MEC, Canada Goose, La Cordee, are all brands that are a more reliable way of identifying a traveller as Canadian than the maple leaf patch!) I could see several ropes, carabiners, and climbing shoes sticking out of some people’s packs.

Mélissa gave me an overview of the park ranger’s address. The ranger had emphasized how the weather was often unpredictable and advised us to be well prepared for these sudden changes. The map that was distributed to us denoted the sections of the trails that were to be avoided in high winds.

This was serious business.

I enjoy hiking, but it rarely takes priority over cycling or climbing. I think I even did just one hike last year. The trails I’ve done average 10-15km and I don’t recall ever doing any exceeding 20km.

Three of our must-do hikes in El Chalten were Laguna de los Tres (20km), Laguna Torre (18km), and Loma del Pliegue Tumbado (20km). And these are the distances from the start of the trail rather than from our trailer!

We started with the most popular of El Chalten’s trails, Laguna de los Tres. This hike leads to the lake at the base of Mount Fitz Roy. Hikers from all over the world gather here to take corny pictures of them throwing snow in the air.

It was damp and chilly the morning of the hike. Mélissa and I stepped out of the trailer well-layered in merino, fleece, and goretex. I had slipped disposable heat packs in my pants pockets for good measure. By the time we reached the start of the trail, a kilometer from our trailer, we had to whip off our scarves and unzip the pit vents of our jacket.

Just before arriving at the first viewpoint, I veered to the side of the trail to remove my long johns. “People are coming!” Mélissa warned as I was in the middle of my thermoregulation project.

I was too sweaty to care. The way I see it, my underwear offer more coverage than the bikini bottoms I wear to public beaches. My pack was already full, so I looped the long johns through the straps. It’s better to be over-prepared than under-prepared, right?

Up until the Poincenot campgrounds (8km mark), the trail is mostly flat as it cuts through a valley. From there, we had 2 more kilometres to go before reaching Laguna de los Tres, all uphill.

Halfway through the zig-zagging ascension, Mélissa was wishing she had been less bashful about removing her pants as I had done 4km ago. It was busier now that we were joined by the hikers who had camped at Poincenot. We were quickly approaching the treeline: it was now or never.

While I waited for Mélissa to peel off her sweaty long johns, I spotted an Andean Condor soaring above the valley. Mélissa was only halfway done when I looked over my shoulder. “What is it?!” she exclaimed. She had heard the chatter of the other hikers.

“Bah!” Mélissa exclaimed as she furiously hopped around in a struggle to re-dress herself.

“Don’t worry, I took a photo,” I reassured her. As if that would’ve made her feel better. Besides, THIS is the photo I took.

It took us three hours to arrive at the lake. The lake is the closest one can get to Mont Fitz Roy without climbing it, and it was teeming with fellow non-alpinists. It was an amphitheater of people funneling trail mix down their gullets, backed by otherwise breathtaking scenery.

The mounds surrounding the lake make it easy to take a deceptively tranquil photo.

I was not surprised by the size of the crowd up there. Laguna de los Tres is not the hike you want to do if you expect to find yourself enjoying the vista with just your hiking partner. It’s the most popular for a reason!

Our second hike was Laguna Torre. The start of this trail was closer to where we were sleeping, but unlike the start of Laguna de los Tres, there wasn’t a spigot from where I could fill my hydration bladder. Mélissa offered to give me the keys to our trailer, but I figured I’d visit the tap at the start of Laguna de los Tres. It seemed like an easier solution than trying to squeeze my hydration bladder into the tiny sink in the trailer. Except, the start of this trail turned out to be much farther away than I had remembered.

I had never done trail running before, but it seemed like the perfect time to start. I arrived at Torre Viewpoint about five minutes after Mélissa. I was red-faced, and my hydration bladder was already half empty.

The fast-moving clouds blowing past the peaks cheated us out of a postcard-perfect image.

After an hour of walking through a labyrinth of thirsty-looking trees in the valley, we came face-to-face with an austral pygmy owl.

Oh, Mélissa, the birds you’ll see when you’re not busy removing your pants!

Of the three hikes we did, I enjoyed Cerro Torre the most. The scenery was consistently splendid. The lagoon was flecked with growlers (small chunks of ice), which I thought was a nice touch.

The finale, Loma del Pliegue Tumbado, was to be the most difficult with 1000m of elevation gain. We had saved this one for last as the weather forecast was looking the most favourable for that day.

I had some concerns about the accuracy of the weather forecast from three days earlier when I noticed the heavy clouds in place of the anticipated clear skies. As this trail started next to the Visitor’s Centre, it made sense to me to double-check with the park ranger before proceeding. Mélissa was in agreement until she saw that the Visitor’s Centre wouldn’t be open for another 30 minutes and decided that she wasn’t scared of clouds.

But, Mélissa, clouds can swallow up mountain peaks! I’ve had friends be plucked off the side of a mountain by a helicopter after their hike got sketchy!

I don’t think it was that she thought I was too conservative; we had spent the last 50+ hours being no more than 10 feet away from each other. She was welcoming the opportunity to decuple that buffer.

“Never give up and good luck will find you.” –Falkor (The Neverending Story, 1984)

My patience and vigilance yielded a warning from the ranger who arrived 10 minutes late that there would be strong winds above the treeline. It was going to be challenging but not deadly. Hats might get lost, but probably not lives.

The beginning of the trail had me meander around dollops of muck in a field of tussock grass. Was it… cowpat?

A bit later I passed a sign warning of wild cows in the area. The sign was in Spanish, but I was able to decipher it based on the pairing of a cow outline and a warning symbol. Besides, just a few metres away were a trio of actual cows.

“Are you the Southern Oracle?” –Another quote from The Neverending Story.

The cows continued munching away as if they were on a mission to cover the entire trail in shit.

The next stage of the hike had me walk steadily uphill alone through a forest of Southern Beech trees. There was minimal cow poop to hop over.

The forest ended suddenly at the final stage of the hike and turned into a barren trail over slopes of shale. At last, I could see other hikers further up the hills struggling against the wind, but none of them appeared to be Mélissa.

The wind was so strong that pebbles were bouncing off my shins. At times it was necessary to crouch and shield my face from a blast of gravel. As I trekked on, I held onto the pompom of my toque and began to wonder whether I had indeed passed Mélissa. Did she blow off the mountain without me noticing?

At the very end, I spotted an improvised barrier of stones around where the other hikers were huddled. No Mélissa.

Then she shot up from behind the wall and waved to me. She beat me by about ten minutes.

I have done many hikes on Vancouver’s North Shore (BC), around Mont-Tremblant (QC) as well as a couple in Maine and New Hampshire. All the hikes we did in El Chalten (we checked off Chorrillo de Salto on day one) were relatively easy, apart from the powerful winds that challenged us at the summit of Loma del Pliegue Tumbado. Otherwise, I don’t believe I could have done more than 60km over three days.

All three hikes were worthwhile, but my all time favourite hike is still New Hampshire’s Mount Lafayette.

One thought on “Hiking El Chalten.”