This is an actual quote by Yann who has been a bike mechanic for so long, he’s forgotten what his hair feels like when not caked in bike grease. He has forgotten that most people barely know how many wheels their bike has.

Did you know that the tire size, 700c is the same as 622mm? 3 years ago, I didn’t. I remember my cluelessness very well. While Yann’s the all-knowing bike wizard, I’m the empathetic mechanic.

When I made my very first bike purchase 10 years ago, I had access to a special deal that allowed me to buy any bike from a certain brand at wholesale price. At the time, I thought $500 was a considerable amount for a bike; after all, there were box stores retailing bikes for under $200.

After 3 years of working in a bike shop, seeing and touching hundreds of different bikes, new and used, I can say with confidence that one should not consider buying a bike that retails for $500 or less. A literal steaming pile of shit would be easier to deal with.

Also, unless you really know your stuff, or know someone who really knows their stuff (not some bro who reads a lot of cycling mags and works on their own bike sometimes), don’t buy secondhand. Otherwise, you’re going to be that person who brings in a bike that they got a “GREAT DEAL!” on in for “minor repairs”. Minor repairs that end up costing more than the secondhand purchase price.

If you are that person, don’t forget to also get upset at the bike mechanic for speaking the truth. “A new chainring is so expensive!” Like it’s our fault THEIR chainring wore out. Metal on metal friction causes wear, who knew?

I mean, if you let your brake pads wear out, you’re going to wear out your rim very quickly too. It would have been cheaper if you just replaced the pads when you were supposed to but nooooo, now you have to buy a new wheel too! That’s on YOU, not us mechanics.

What I wanted to share today, though, is this: 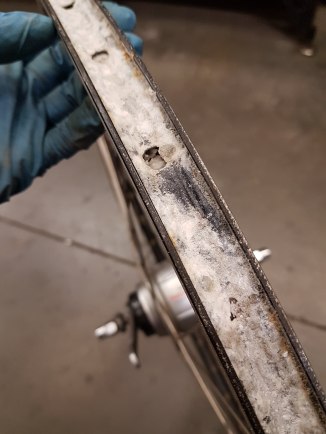 What the devil? WHAT THE FUCK? Oh my glob.

There’s corrosion… and then there’s this atrocity. It was as if somebody had parked their bike in a vat of acid throughout the entire winter.

Still don’t get it?

I was easily able to poke holes through the rim with a reamer (not to worry, we do not charge for this service).

If you live in a city that uses road salt in the wintertime, bring your bike inside and wipe it off with a wet rag.

Bring your bike in for service before and after winter.

Better yet, always keep your bike indoors. They’re meant to be enjoyed outdoors, but stored indoors. Not on your balcony. INDOORS.

Don’t get Huffy, but there’s no such thing as a good Supercycle, and don’t be fooled by “Italian” names like Minelli. Finally, “Schwinn Quality” is an oxymoron.