Yann was expecting something to be wrong with the pizza he had brought back to the Airbnb. Is slicing pizza in a grid pattern considered wrong? 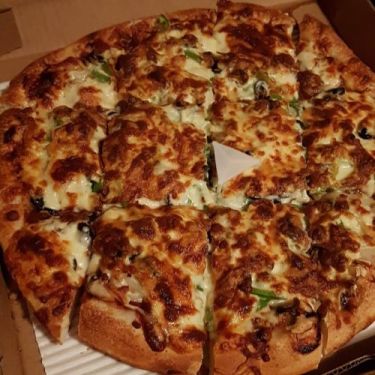 While Yann, the furry dudes and I were on the move across Canada, pizza was our go-to meal. I think I had a chocolate glazed Tim Horton’s donut at every province we stopped in. I saw my first 7-Eleven store in western Ontario but didn’t get my Slurpee until we entered BC. This is noteworthy because the world’s largest convenience retail chain has been shut out of Québec. I was cut off from access to Coca-Cola Slurpees for four years.

Our trans-Canada move wasn’t much of a road trip as the cats had no interest in stopping at any of the roadside attractions. We missed out on seeing the giant coin of Sudbury, ON but we did catch the backside of Wawa’s celebrated Canada goose sculpture as we drove past it. I would’ve liked to stop for a proper touristy photo, but the visitor’s centre next to where it was parked had been chained off. 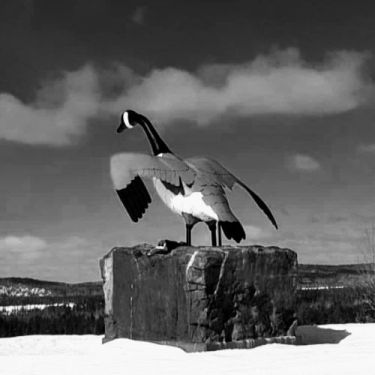 We missed Max the Moose in Dryden and Husky the Musky in Kenora, but we did stop at this delightful gas station slash gift shop between Raith and Upsala.

Who stops at a Podunk gas station for anything other than gas and a piss? Am I underestimating small town folks’ penchant for 3D art? I was about to take a photo of a porcelain trio of eagle enclosing a small clock, but I noticed the gas station clerk staring at me. It was time to get out of there.

We watched the landscape change at an average of 90km/hr as that was the speed limit of the U-Haul trailer. The only other oversized roadside attraction we saw was Medicine Hat’s 215ft tall tipi.

From the highway, it appeared to be about as large as Yann’s head, which isn’t very large.

Saskatchewan was the only province we passed through that I had never visited. Yann got to experience three new provinces: Alberta, Saskatchewan, and Manitoba. If you want to know what Yann thought of the prairies, you could check out his highlighted Instagram story here. I should notice that he did all the driving (with the help of cruise control).

I attempted to complete a toque within the journey, but near the end, I realized that my double pointed needles were packed away. I may have given Enfoiré the false impression that I was knitting him a sweater. (Which is something I’ll do, once I figure out how to knit arm-holes.)

My biggest responsibility was booking all the AirBnb. With the exception of the span between Ottawa and Sault Ste. Marie, ON, it wasn’t too difficult to find a cat-friendly place for under $100. Between the two cities, there are only small towns the majority of Ontarians have congregated south of Highway 1 (the Greater Toronto Area).

Our first Airbnb was a cabin in the woods in a town named Rapides-des-Joachims. As this town is right across the Ottawa River, it meant we dipped back into Québec after doing 230km in Ontario.

This cabin was right off the highway. The snow packed backroad didn’t give the car and trailer much trouble, until the next morning when we had to head back uphill. Fortunately, the owner of the cabin had a personal tractor, which he used to haul the four of us plus the Jetta, with the U-Haul trailing behind uphill.

Had we ended up stuck, I would have felt responsible. I chose this place as our first stopover, and I screwed up?! How Vancouver of me to not take into account snowy road conditions.

“When we stayed in Thunder Bay on our cross country trip, the owner of the hostel we stayed at offered to take us to the city dump to see the bears… we declined.”

Yann and I also received excellent hospitality from our AirBnb host there. She did not offer to show us the dumpster bears, but she made us scrambled eggs for breakfast and gave us some fruit for the road. She was incredibly kind; I had trouble writing an honest review for AirBnb.

That was the worst of our trans Canada AirBnb experience. The best AirBnb we stayed at was in Calgary, but it came with a side of extremely challenging parking. There were many parking spots around the apartment complex, but none were big enough to accommodate the Jetta and U-Haul trailer.

But Yann is a parking legend. He managed to occupy side by side parking stalls by backing the trailer up at a 90-degree angle. What an absolute unit.

I’d say his parallel parking skills are unparalleled, but he claims that his father is an even more skilled parker. I guess it’s in the genes!

Calgary was one of my favourite stops. It helps that it was the first city where I voluntarly relocated. I lived there from 2003-2004. One of my closest friends still lives there: Gator. We don’t even talk regularly, but when I saw her again, my arms flailed nonstop for five hours. Gator also had the honour of being the first deaf person I got to sign to in a year! We were so busy catching up that we didn’t think to take a photo together. This upset our mutual friend, Ryan: 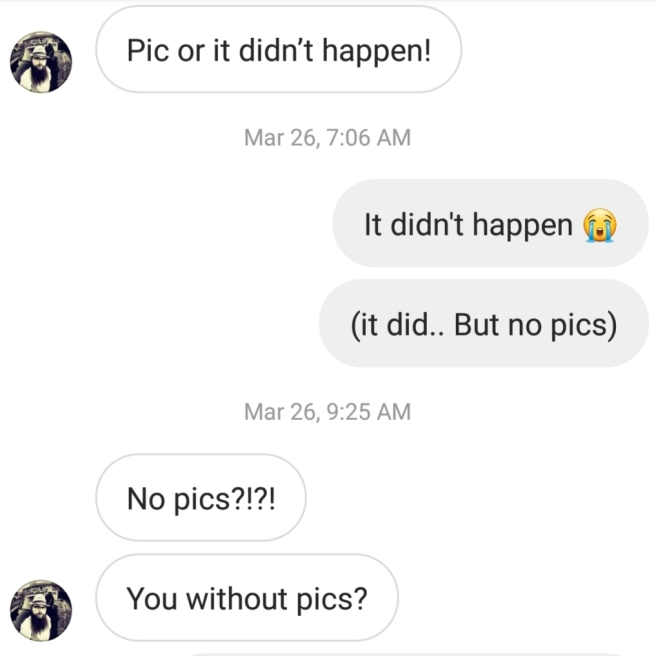 If anyone were to get ahold of my phone, they’re going to be very confused by my photo album. Here is my idea of a noteworthy subject:

I aspire to eat spaghetti off the pope’s face someday. I don’t even care which pope. I’d like the entire papal lineup on our dinnerware. I know there are over 200 ex-pontiffs but our new kitchen has a lot of storage space and we also have a dishwasher!

Back to the topic of our westward traverse, we spent our seventh night in a trailer on a ranch in Kamloops (thanks for hooking us up, Cat!). Kamloops is a city in south-central BC, just 350km east of Vancouver. It’s one of Canada’s hottest (in the summer) and sunniest cities. I had been to Kamloops a few times as a kid, but this was the first time I realized that it was a liveable place. Unlike Thunder Bay.

“Maybe we should just live here instead?” I suggested to Yann.

Instead, everything more or less went according to plan, and we ended up in Victoria. I would have appreciated a more touristy Canada crossing experience, but with the involvement of Saskatchewan and Manitoba, I would not do it again. It’s going to be wedge-shaped slices of pizza for me from now on.

2 thoughts on “Trans-Canada hits and misses.”