Yann asked me if I knew how to use clippers.

“Yeah, I used to have my own back when I had a mohawk. Waaaaay back, yet waaaaaaay past the 80s”

If he needed the reminder, so do you: 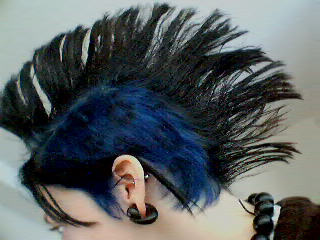 Yann wanted me to shave his head using the 1″ clipper comb. I wanted to see if I could do what barbershops have been charging him $20 for. It was going well, if not slowly until I realized I had gone too far up the back of his head with the scissors. 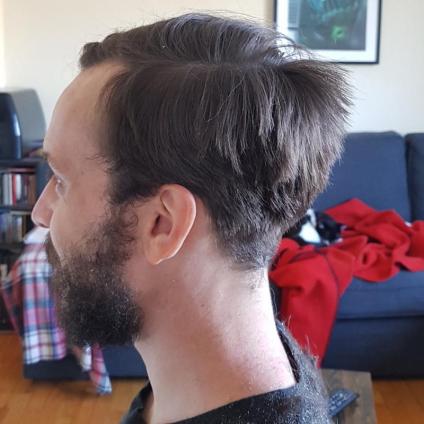 Before he could utter the sentence, “I’d like to speak to the manager.” I snapped the 1″ attachment onto the clipper and effectively de-Karenized him. He wouldn’t have made a good Karen anyway. I had him take the Alignment Test as mentioned in this post, and not surprisingly, he’s a True Neutral.

Neither Lawful nor Chaotic; neither Good nor Karen.

Yann was told by the liquor store clerk this afternoon that his name had a lot of letters. (It’s a compound surname.) This Chaotic Neutral would have responded, “Noted. I’ll make sure to get rid of the excess letters, thank you.”  Yann? “Yeah.”

My full name is also rather long. When filling out forms that have boxes for individual letters, I’ve often found my name bleeding off out of the last box. People constantly misspell my surname, and likely also mispronounce it.

Yet, having a long name has yet to outweigh the hassle of legally changing it. What would I even change it to? I can’t come up with anything effortlessly cool.

Anyway, I have my initials tattooed on the inside of my mouth so it’s a done deal.

I’m living my simulated life as Laura TheSquaremeat. I have moved back into my childhood home: 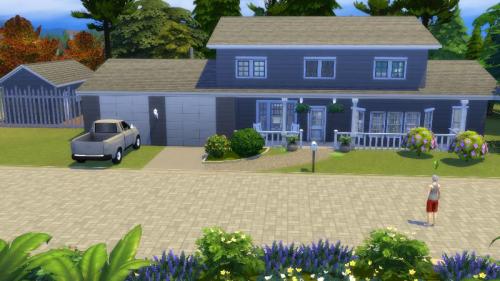 Both garages are fake instead of just the one on the left. The garage door on the left of the real house didn’t open and, instead of clutter, contained a rec room. (I’ll probably never live in a house so big that it has a rec room again.) 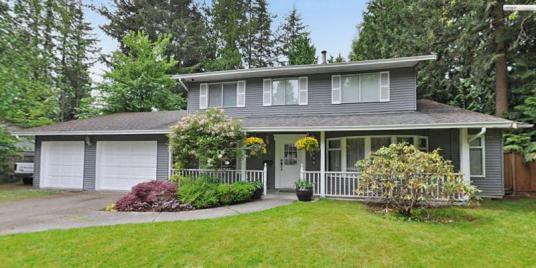 Dad built the aquarium around a rectangular piece of glass that was a leftover from Expo ’86.

Dad has never been a man of small projects. I think this one took him almost a decade to finish. It had to be moved between two houses before completion, which required knocking out a large hole in the side of the house–after it was sold. The aquarium was the coolest feature of my childhood house, alas, even a simulated aquarium is unattainable.

I dropped some decorative bunny-shaped objects in a cage to re-create the rabbit paddock: 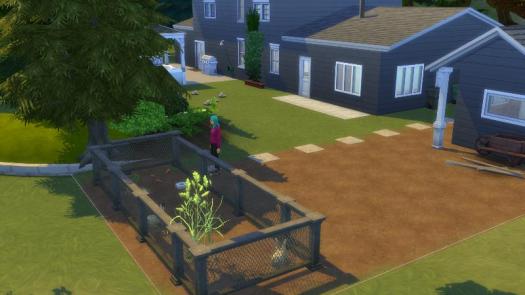 Even though following a pre-existing floor plan isn’t creative, this required a lot of creativity to accomplish. For example, I re-created the hot water tank in the laundry room by sizing-up a thermos and then combining it with a pipe chimney. 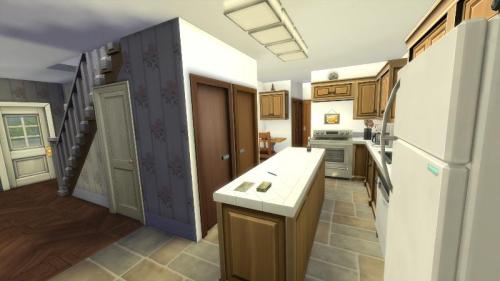 The kitchen is very accurate, although lacking in chickens. Mom had a chicken-themed kitchen. How suburban of her. I guess she was kind of a Karen?

Note the banknotes on the counter? That’s a nod to Mom’s money baiting ways. So, the thoughtful details make for a rich re-creation.

Why would I want to re-create a place where a lot of childhood trauma occurred? 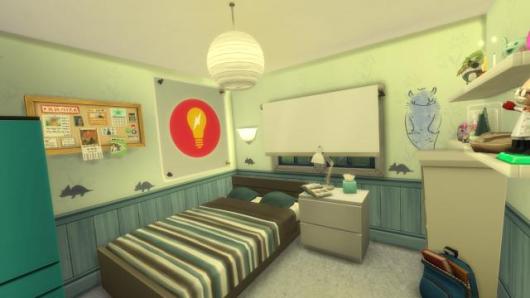 It was an amazing house. I didn’t realize it at the time; now, I am in my mid-30s and renting a one-bedroom apartment that I’m not even able to afford alone.  I am in a better place mentally, though, which proves that $ ≠ happiness. Stability, yes, but not happiness. 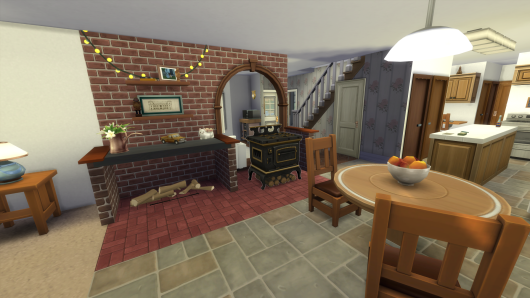 Clicking on Tab+Shift in The Sims allows you to see the world through simulated eyes!

IT IS SO WEIRD WALKING THROUGH A RECOGNIZABLE PLACE THAT NO LONGER EXISTS.

I mean, the house is still there, but the subsequent owners did something sinister to it. The photos on the old real estate posting showing the updated interior decor were spine-chilling. I spotted a wine bottle holder that looked like a giant stiletto, which suggests that an entire family of Karens once occupied the house. 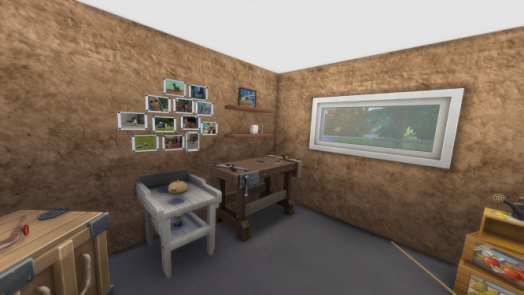 The shed was where Dad hid his weed. In a cookie jar on the middle shelf. I ‘member.

During Christmas, we had a real tree. Here’s a simulation of a real tree: 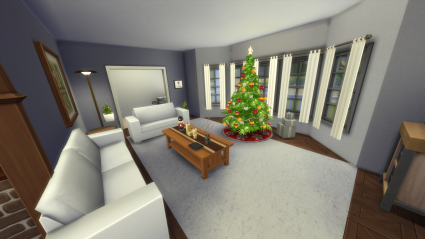 This was the living room, where I was not allowed to live my life, except for on special occasions.

Mom was so sure I’d ruin the white carpet in the middle with drink stains that I was not allowed in there. (She was 100% right, my bedroom had light-coloured carpet and assorted food and drink stains.)

It was also the best room to perform indoor gymnastics, so whenever Mom was distracted, I’d practice my cartwheel–until I hit my right shin on the corner of the coffee table. The coffee table had sanded-down corners, so instead of slicing my shin open, the skin collapsed.

I still have the scar.

Am I so sure that I am in a better place mentally? Maybe I never recovered.

Maybe it’s also made me a more interesting person.

I couldn’t resist re-creating the fairy rings in the backyard. 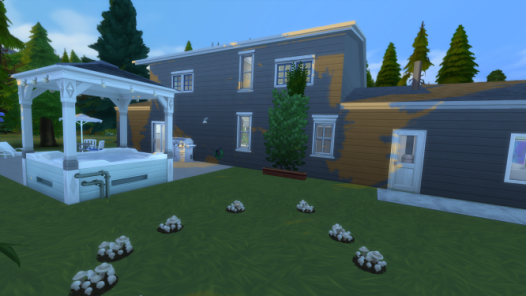 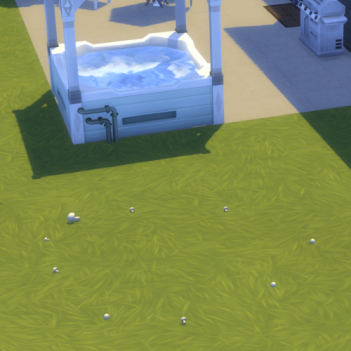 If you play The Sims, there’s a cheat that allows you to use other items found in the game that are not available in build mode, such as the fruits and vegetables that momentarily appear during simulated meal prep.

The first person I invited over upon completion of the home was Yann. The first thing Yann’s Sim did was run over to the mushrooms I had carefully arranged and started digging them up.

“Your Sim is ruining my work!” I yelled at Yann.

I think my next project will be to move on and recreate my uninspiring apartment suite.

I wouldn’t be living in the past anymore. I would be living a meta life.

13 thoughts on “Karenizing Yann and Simming my way into the past.”