Well, I’ve decided to draw more attention to myself: my hair has returned to the colour it was when I was 12. 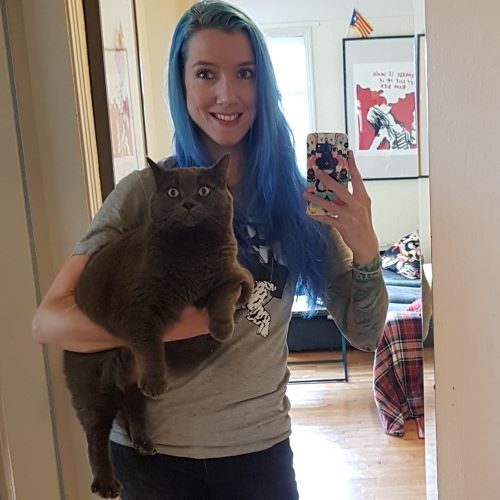 This was two weeks ago. Recent enough that some people assume I did it for Halloween. Awkward. Instead of making the most of it, and going as Milhouse as Fallout Boy tomorrow night, I’ll be spending the evening blue-haired on my couch.

I didn’t mean for it to come out this blue as dark hair doesn’t suit me. I’m hoping it’ll fade quickly. In the meantime, I’ll gladly accept compliments on the hair or any other words of flattery.

In my late teens/early 20s, my hair cycled through all the colours in the rainbow. Mom would’ve been mad had I come home with jewelry stuck through my eyebrow, but blacking out my blonde locks barely elicited a reaction from her.

I was hoping for a similar non-reaction from my family when I visited them on the mainland last week. My bald dad shrugged, while my grandparents were probably just happy that I don’t have tattoos. I’ve been wearing long sleeves every time I’ve visited them for the last five years, so I’m not sure they know I have a full sleeve and then some. Pre-sleeve, pants and a t-shirt were enough to conceal all my ink.

My visit to the mainland was made possible by the cutbacks to the hours of casual staff at work. Although it’s the norm, it seems immoral to hire someone and have the authority to cut off their cash flow because it’s the slow season. Neither my rent nor my food cost less during the slow season!

When Dad picked me up from the ferries, after I shared my underemployment woes, he excitedly announced the installation of a sauna in the guest room of his place. Then, I had to tag him along to the metal refinery. I have the kind of dad who finds himself with a bag of leftover gold. Yes, my dad is a leprechaun.

“We need to make a stop at the refinery first, I have an annoying amount of gold!”

I had the option of sulking in the car while Dad visited his friendly neighbourhood refiner, but when else would I get the chance to tour a metal refinery?

This place was in an early 80s business complex. I was sucked further into the 80s when I entered the building: the secretary was seated on a brown vinyl office chair behind a wood grain laminate desk, and behind her were beige filing cabinets. On the desk was a curly-corded phone, and there may or may not have been a Rolodex.

The refinery magic happened further back in the building, behind another door. Before we could enter the zone of riches, Dad and I were directed to the staff meeting/lunch room to wait for our turn. In this room was a sepia poster featuring old-timey gold panners. On another wall was a large poster of a hand-drawn map of BC and Yukon, marking all the gold rush towns.

While we waited, Dad explained how there are still people who work in the north as independent miners! Some individuals still pan for gold, which they then bring to this peculiar 80s business complex in Richmond in exchange for cash.

Once Dad and I were allowed in the area where the refining happens, I got to see rows of metal bowls containing gold nuggets and flakes. In each bowl, the value of the contents was noted on a strip of paper. A small handful of gold will get you $20,000, bringing you closer to acquiring the excavator of your dreams! 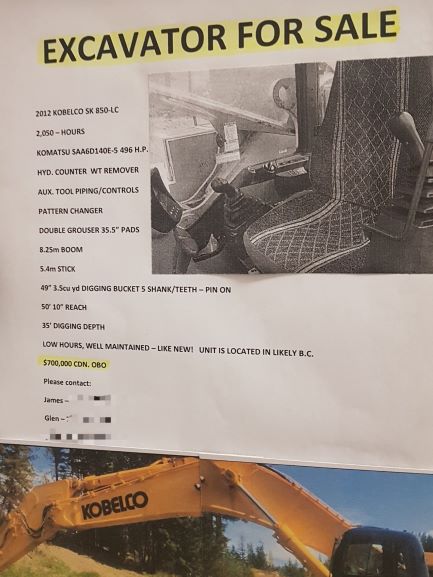 $700,000 for a machine used to make massive holes in the earth. If I do this in Victoria or  Vancouver, I could profit from renting out the pits I’ve dug for $1000/mo!

It was an interesting way to have my relative poverty rubbed in my face. None of the money in my bank account has come from my dad, but you bet I sweat in his new sauna and let him buy me sushi dinners during my visit.

Returning to the island last Friday was made impossible be by high winds. When I saw that BC Ferries had cancelled two sailings in a row, I begged Dad to take me back to his place in Maple Ridge. He was willing to drop me off in the ferry terminal in the evening, but I did not want to deal with the horde of angry passengers who had been stranded for the entire day.

Here’s the interesting thing about last Friday’s ferry cancellations: the reaction from the public on how BC Ferries handled the situation. People were angry about the lack of communication from BC Ferries as some of them ended up being so far back in the line-up for vehicles that they couldn’t hear the announcements.

Now, I don’t understand how Alanna Kelly thought interviewing me was going to work without an ASL interpreter, but I would have jumped at the opportunity to remind hearing people that, yes, access to information is important. Not just for them, but for everybody.

I know all these sailings weren’t cancelled willy nilly. I thought BC Ferries did a reasonably good job at helping me via Twitter.

And, hey, I did make it back on the island without the Deadliest Catch experience.

3 thoughts on “The sea will never be as angry as stranded BC Ferry passengers.”