I’ve given some spectacular gifts.

And some really bad ones which hopefully were so bad, they were good. Like this modified soccer trophy:

I made the guy at the engraving kiosk in the mall laugh when I handed over my written request, but he was able to maintain a sense of professionalism when he handed over the plaque listing the font samples. It was a special moment, and as far as I know, the gift recipient still has this trophy.

I didn’t find it appropriate to give Yann a joke gift for his birthday back in August. Instead, I gifted him a sewing machine, not because we’re the type of couple to go big on gifts for each other, but because I knew it’d also benefit me. I am generous, yet selfish.

I’ve always liked the idea of having a sewing machine, just not enough to justify the cost of getting one. My neighbours are notorious for leaving random crap curbside. Maybe one day I’d luck out and find a working sewing machine? Even then, would the machine see regular use, or would it join my collection of seldom-used acrylic paints and knitting needles in a box? Well, Yann getting old was justification enough, so we welcomed a Janome HD3000 in our home.

I call it the Yannome.

Yann is already on his way to mastering the sewing machine, and I’ve already benefited from his newfound hobby. Here’s my new toiletry bag which keeps my brushes separate from the rest of my face shit: 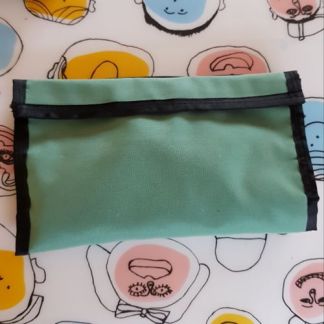 My neighbours may not have tried disposing of an old sewing machine by the sidewalk, but three months ago, I had the opportunity to adopt a 30″ Spiderman plushie. Rather than take him home to introduce to the cats, I installed him in the tree outside my apartment. I wasn’t expecting him to last for very long, so the next night I climbed up the tree again to secure his limbs to the branches with zip ties. 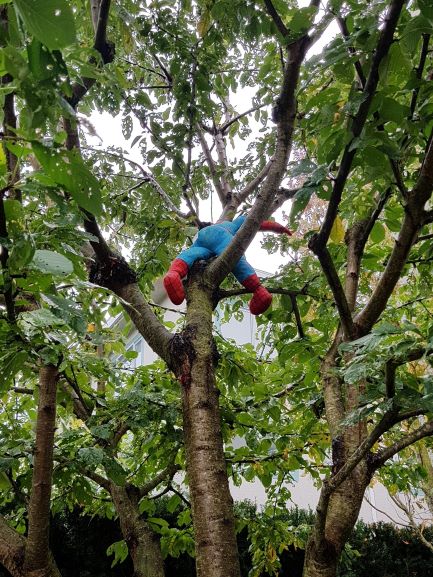 So, this was three months ago: the novelty of having Spiderman guard my apartment building had long worn off. Eventually, I was like, “I guess he’s going to grow mushrooms now.” I considered exterminating him myself, but with Halloween quickly approaching, he now qualified as Halloween decoration. The timing wasn’t right.

I love Halloween. I used to enjoy crafting my costumes. I’ve been Dora the Explorer; Megavolt from Darkwing Duck; Lady Rainicorn from Adventure Time; a baked potato; and the 2010 Vancouver Olympic Mascot, Miga. These costumes involved mostly hot glue, paint, and dye. I once incorporated spray foam insulation in the costume making process. Now that I’ve retired from attending social events, I’ve decided to downgrade to making costumes… for a doll.

Spiderman, I decided, was going to make the changeover from Marvel to DC with a poorly made Batsuit.

It’s silly, but also not. My drive for perfection often ends up sucking the fun out of the creative process. I frequently abandon projects when they start to feel like a chore. So, when I create something temporary, like gingerbread houses, or a miniature sushi platter to leave in a Japanese restaurant’s garden, the pressure to be perfect is gone. 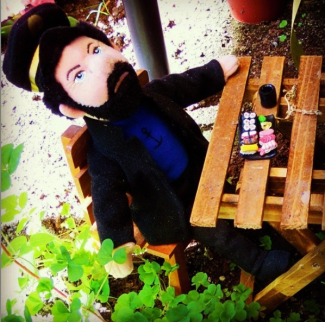 Captian Haddock was already there, waiting for his meal.

This Batman costume was perfect as a first sewing project, except it was not the three-hour project I expected it to be.

Creating a costume pattern from thin air was absurdly challenging. I made my first mistake off the bat(man) with the first panel of fabric. Rather than re-doing the first panel, I decided to work around that wonky panel by adding extra fabric where needed. Yann could tell that I was out of my depth and intervened, but even he frequently found himself flummoxed.

Back closure with visible bunching.

Twisted seams and bunched fabric galore! The process involved mashing Spiderman’s big butt in and out of the Batsuit repeatedly. 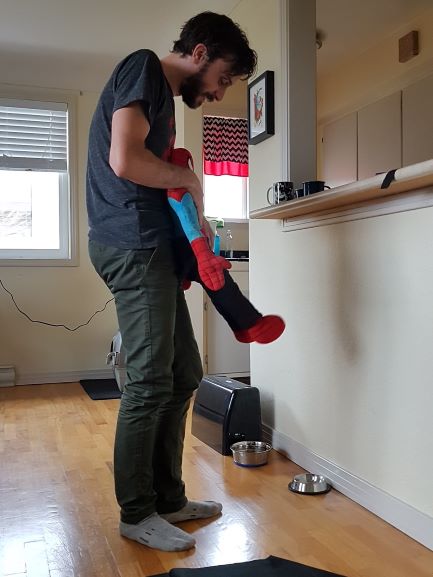 Please note the yoke in the below photo: that’s Yann’s doing. He just couldn’t stand the idea of Spiderman wearing a low-cut Batsuit.

Since sharing photos of Pruce Warker on Instagram, two people have suggested that we add a utility belt. What? No. I mean… We already spent three days making a costume for a pre-costumed plushie with the intention of leaving it outside in a tree until the end of November. Something so useless doesn’t need a utility belt!

What’s going to happen to him at the end of November? Hint: red crushed velvet and faux fur trim. Hohoho!

2 thoughts on “Learning from many mistakes.”