Look at this cat, isn’t he incredible?

He has chewed the straps of my sports bra in half. Twice. That is incredible.

He has also chewed off and swallowed the knotted end of a hoody drawstring. The knot remained in his belly until he yakked it up three days later. But before his puke revealed what had been wrong with him, his loss of appetite on day one was so disconcerting that Yann and I wasted a hundred dollars on a visit to the vet. Incredible.

Even after this ordeal, he still finds hoody drawstrings irresistible. He’s incredib…ly infuriating.

Last week, Takaya dropped into my neck of the woods for a visit. Takaya is a wolf who spent the last seven years living on Discovery Island all on his lonesome. Then, one morning, he woke up and decided, “I’m going to doggy paddle one and a half kilometres to Victoria.”

Why not? Victoria is brimming with deer. Not just any deer, but cultured ones that choose to nosh on the garden out front of the Emily Carr house (a National Historic site of Canada), as seen below.

Victoria also has fancy poultry. I recently found this pair bobbing their heads as they walked across the supermarket parking lot. 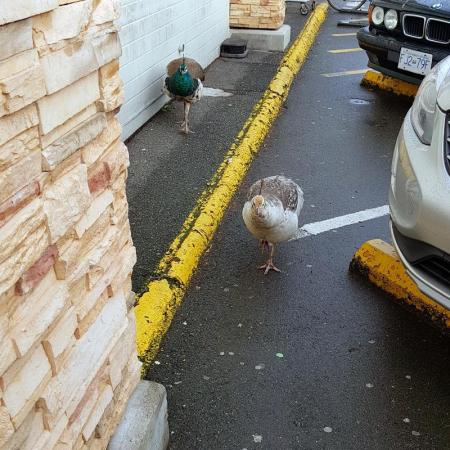 To get here, they had to perform their head bobbing strut for seven blocks from the park, from where they came. Beacon Hill Park is home to about 50 of their kind, versus what seems to be thousands of ducks. The ponds currently seem to be overcrowding with ducks. If all the ducks were to take flight, about an inch of water would be all that stands in the ponds. Are the peafowl getting pushed out of the park by the ducks? Am I hoping one of the park operators will read this post and answer my question? Possibly.

So, what’s going on with the animals of Victoria? The Duke and Duchess of Sussex were recently in town, did the stench of royal blood cause our wildlife (and peafowl) to go haywire? We could also consider the theory that wildlife is the first to detect impending natural disasters. If it’s the latter, though, Takaya would be just fine.

Last October, he was the star of an episode of The Nature of Things with David Suzuki  (he’s the Canadian David Attenborough). In the seven years he’s lived on Discovery Island, he’s learned to harvest oysters, hunt for bird eggs, and skin seals. In the summer months, when the wetlands have dried up, he quenches his thirst with water from a well he’s dug!

Now, it appears that he’s returned to the mainland in a last-ditch effort to find a mate. The lifespan of a wild wolf is 6-8 years old, and our hero is already 9. I’m a little disappointed that I missed his brief stay in my neighbourhood. He was sedated and relocated elsewhere.

The documentary can be watched here (yes, there are captions, but you must be located in Canada to watch the episode.)

5 thoughts on “The best beast of the island.”