What does it take to build a cookie replica of the Ambani house?

Imagine being called a philanthropist for giving away 0.4% of your net worth? Imagine building your home on land that once belonged to an orphanage? Imagine having built a home so extravagant, that it gets its own name? 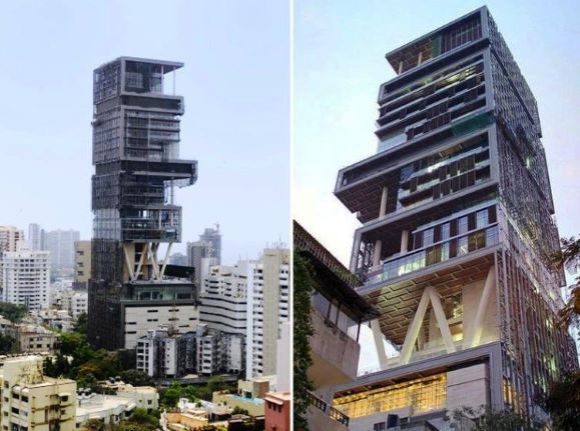 This is Antilia, the world’s most expensive private residence at a value of over $2 billion.  It has 6 whole floors just for cars, a snow machine, and three helipads. It’s so ugly, I hate it!

Could I make something so tasteless so delicious? And how? 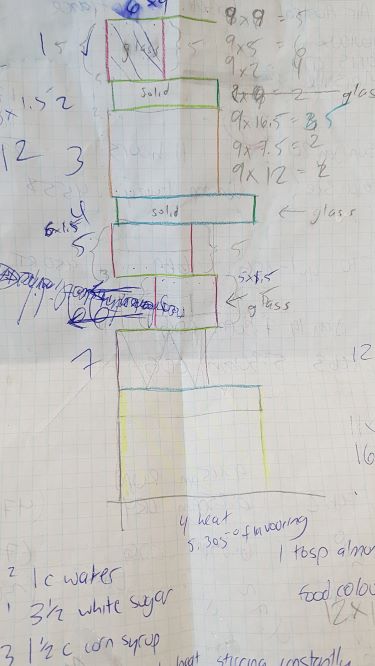 All of my past gingerbread buildings started with a blueprint. Normally, I draw up a blueprint for every side, but because Cookie Antilia was going to be structurally simple, it wasn’t necessary this year.

The first step is to figure out how large you want to make the house. Start by determining the measurements for the biggest piece and the smallest piece. Using the grid as a guide (1 box=1 centimetre), I found the 1:1 ratio to be too small and upped it to 1:1.5.

An analysis of the rudimentary blueprint shown above suggests that I don’t understand basic multiplication. In actuality, the first two numbers show dimensions of each piece and the equation is the number of pieces needed.

For the next step, I made cardboard templates for each piece. I could have just reused one 9cm x 9cm cardboard template five times, but I’ve found it to be easier to keep track of how many pieces are needed, and where the pieces go by making a cardboard pattern for all pieces then colour coding them.

This year’s creation featured only squares and rectangles because the pieces were not only going to be gingerbread, but also hard candy. I had never made hard candy before. How hard could it be? I was about to find out.

I had the clever plan of making moulds using leftover gingerbread dough but there was zero guarantee that it would be anything other than a spectacularly sticky failure. The recipe called for a candy thermometer but I was like, “Pfft, it can’t be hard to differentiate between sugary water boiling at 100ºC versus 154ºC.”

I was wrong. Bubbling syrup looks the same at 100ºC as at 154ºC, until it cools down. The result of my guesswork turned into a puddle of blue goo, so I went out and purchased an $8 candy thermometer. 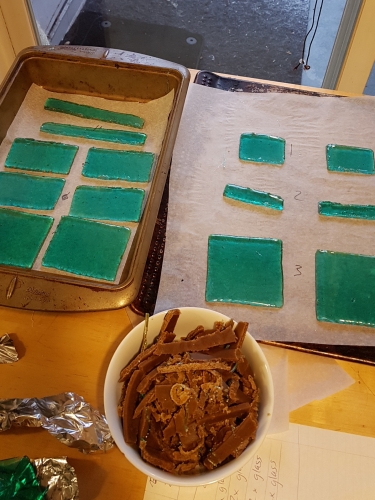 Success! The candy hardened within 30 seconds of going into the moulds. I gave the pieces 15 minutes to cool completely before peeling off the raw dough borders.

When baking gingerbread pieces for the house, it’s not a problem if pieces don’t come out uniform as a handful of M&Ms and icing can mask imperfections. The icing sugar and egg whites, on the other hand, need to be beaten to perfection.

If you don’t spend time getting the consistency of the royal icing just right, you’ll get annoyed trying to hold sliding pieces of gingerbread together. I was about to attempt, based on my original calculations, building a 46cm tall gingerbread structure on my own. There was no way I could half-ass the icing mortar and expect the building to not collapse, particularly in the presence of a very inquisitive 18-pound beast.

After the eight layers of gingerbread and hard candy were stacked, Cookie Antilia stood 54cm tall. Before being festooned with candy, this monstrosity needed a minimum of 12 hours for the royal icing to set.

I couldn’t just leave it sitting on the kitchen table, not because I have two cats, but because one of them actively looks for trouble. I carefully moved Cookie Antilia onto the floor, scooted it down the hallway and into the bedroom closet where it remained in the dark until the next day.

On the third day of construction, I reloaded my piping bag and aimed it, with shaky hands, at Cookie Antilia. It’s hard to avoid eating candy when they’re strewn all over the table; the more candy I eat, the less steady my hands get. It wasn’t like I was suckling from the piping bag, but three hours of steadily devouring candy adds up. In the end, I got most of the candy on the house rather than in my mouth.

Since you’re likely shaking with anticipation at this point, I present to you, an entirely edible version of Antilia, built at 1/2000000000ths the cost of the real thing: 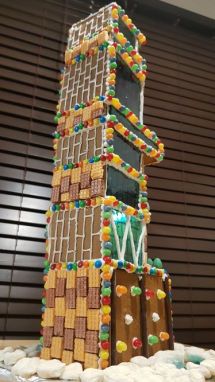 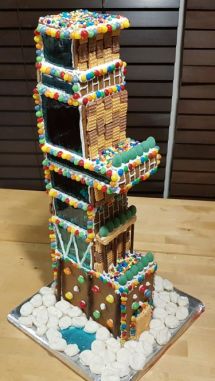 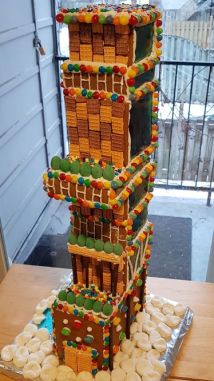 As seen lit up using a headlamp inserted into the cut-out in the base:

For scale, here’s Enfoiré aka the 18-pound beast peeking into what the Ambani family calls the maintenance floor: 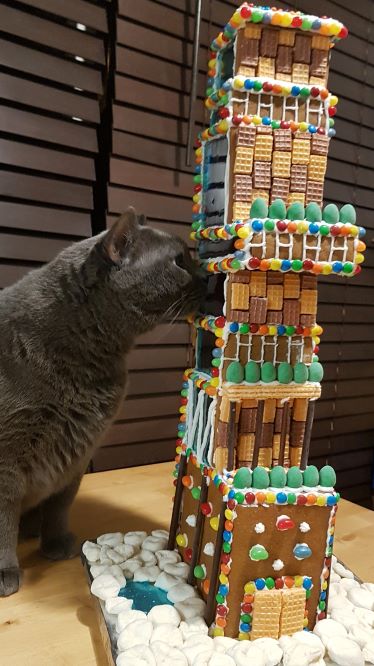 Excluding labour, the final bill came to about $20, which is pretty much 0.4% my net worth. I could have donated this money to charity, but we already know $20 isn’t enough to be labelled a philanthropist. Instead, I donated the house to the hungry wolves that are my colleagues who hopefully will now recognize me as a Cookie Genius.

I don’t know most of the people I work with, but I am constantly amazed by their willingness to eat stuff of questionable origins. I made Yann leave a note warning people of stale marshmallows, but we do work with people who do stuff like climb frozen waterfalls and ski jumping. Deflated marshmallows don’t scare them.

Underpaid workers united have the power to topple capitalism!

But do I deserve to be called a Cookie Genius? That depends on whether anybody entered a gingerbread version of Xanadu 2.0 in the McGingerbread Hell McMansion Gingerbread House Contest.

Edit 19/01/07 The results are in: there are a lot of talented cookie architects out there! Cookie Antilia didn’t even make the top 8.

That’s alright because next Christmas I will have my friend Tammy’s help. Tammy, like me, has the tendency to go overboard with projects like this. We’ll be going full Christine McConnell!

I'm a Deaf vagabond currently living on Vancouver Island. Bicycles dominate my life, but I also make time for climbing, hiking, camping, and cats. And if I have time left over after all that, I write about it. View all posts by lkvy

4 thoughts on “A taste of the lifestyle of the rich and famous.”