Preface: Two friends and I set out to make Pruno using this recipe. (There is now a WikiHow for Pruno!) Pruno is a type of alcoholic drink that can be made using just food found in prison.

There was a post about the process dated January 24, 2005, but it’s mainly me complaining about having to peel a lot of oranges. The thrilling post was supposed to come once Pruno was ready (but probably not safe) for consumption. 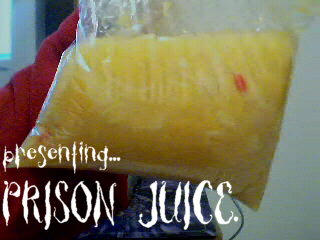 That day did not come, because we forgot about Pruno until I brought it up in a MSN conversation months later. (I’m “bolo throwing champion of 1976”.)

October 27, 2005
For those with Alzheimer’s, as well as those who have just discovered my site, please refer to the January 24th update.

It never got consumed because by the time Ryan, Victoria, and I were available, it had been three weeks since production and therefore too old for consumption.

For some reason, Ryan just left it sitting in his closet, until last month.

+/- I’m HIV positive you’re gay. says:
dude, pruno is gone. my mom made me throw it out, it was eating through the bag

bolo throwing champion of 1976 says:
When exactly did your mom get rid of Pruno?

bolo throwing champion of 1976 says:
And I wasn’t informed?!

bolo throwing champion of 1976 says:
What did your mom say anyway?!

+/- I’m HIV positive you’re gay. says:
i was too heartbroken

+/- I’m HIV positive you’re gay. says:
wellllll,, my room began to smell. with no significant other to tell me that my room smelled, i didn’t smell it until my mom smelled it and then she told me it smelled and found the bag and left me a note that said “What the fuck is this? Throw it out”

+/- I’m HIV positive you’re gay. says:
and the she wanted to talk to me about why i was hiding bags of rotting fruit in my closet and i explained to her it was prison juice, like the stuff they make on the hit HBO series, “OZ!”

+/- I’m HIV positive you’re gay. says:
then she gave me a weird look and told me to throw it out because it smelled bad and no one would like me if i had a smelly room and i smelled bad so i did because i like girls and i want them to like me so i try and smell good