I’m confused about how I feel about being back at work. I got too used to not being around people so I forgot how awkward the public can be around me, which in turn, makes me feel awkward.

The best part about wearing a mask at work is that I don’t have to figure out what to do with my mouth around people. I’ve noticed that some of the staff at the local supermarket have full-face visors. I’d like that, but tinted–or a mirror finish so that all those bumbling hearing people can see how they look then they react to my deafness.

No, really. The two-month quarantine period really did fuck me up socially. Anyway, we’re living in a time where wearing something like this is now socially acceptable: 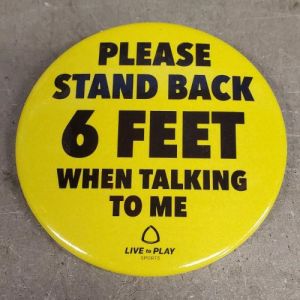 This isn’t enough for me: I’d like to take it a step further. Well, 10 (tiny) steps further:

Hearing people constantly overestimate how well I can lipread. Now that many people are opting to wear a mask, I can no longer tell when a customer is trying to talk to me. By standing an additional ten feet from me, I assume they’d have to speak louder, and by doing this, a co-worker will hear them and take it from there.

I am becoming reclusive. On the other hand, I’ve been working on a new video for YouTube which, means I’m still interested in participating in society in a meaningful way.

Filming myself interacting with an audience that doesn’t yet exist has been a weird experience. I’ve been writing stuff for nobody in particular for 20 years, so blogging at least feels natural to me. Here, I can review what I’ve written and then make edits. It takes me two minutes to edit something I wrote here two years ago. While I can edit my videos, I can’t make corrections to my signing: I have to redo the whole thing.

I’ve considered redoing the latest video. Instead, I’ll still post it and perhaps redo it later, when I’ve become more comfortable with filming myself. I’ve seen enough videos of YouTubers reacting to their old vlogs to know that it’s normal to be awkward, to begin with.

Two weeks ago, my buddy and fellow UToober, Kristina, introduced me to a deaf YouTuber from the UK who had the guts to share the bloopers from one of his uploads. I must say: seeing someone else struggle that much was uplifting!

Anyway, the upcoming video is about how I tripped and found myself in a shop apron with bike grease all over my arms rather than a technical how-to video. I never set out to be a bike mechanic: it was a happy accident, but it was also initially full of struggles. I can be open about my challenges as a deaf female in a Francophone bike shop, why pretend I’m a natural on-camera?