If you follow me on Instagram and follow me closely enough to stay updated on my Stories, you would’ve caught my overview of the shitstorm caused by a popular YouTuber on Sunday.

I’m not going to repeat as much of the details here as I don’t want to direct further attention to this person’s channel.

The story begins with a hearing person with no ties to the deaf community who gained notoriety for her “ASL” videos of songs. The spoken portions of her uploads are often not accompanied by captions thus making them inaccessible to deaf people who rely on them.

That’s not all; she decided to start selling ASL-themed merchandise. At this point, Chrissy Marshall of The Essential Sign and 50+ other members of the Deaf community convened to write an open letter delineating the issues with what this person was doing. The letter was very polite and informative, yet it resulted in posts on Instagram, Twitter and even a new non-captioned video by this person accusing the Deaf community of attacking her.

Any comments not backing her up 100% were deleted, including mine which read “I read the letter that was sent to you and found it to be very polite and informative.”

Infuriated by how much attention this total turd cutter was getting for her merchandise, I decided to boost my deaf friends’ merch store with a tweet. 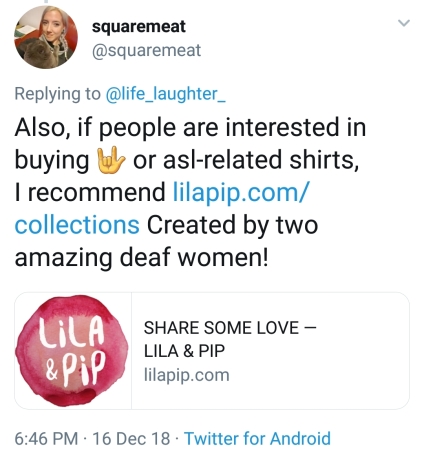 At the time of writing, this tweet has been seen more than 3,000 times and the link has been clicked more than 175 times. This was pleasantly opportunistic of me.

The merch sold by my friends is to supplement their program, which helps families with very young deaf children learn ASL. I wanted to talk about why I support Alayna and Erin, but I cannot do this without mentioning our history.

Alayna and I met 32 years ago at the BC Elks Auditory Rehabilitation Centre, now called the BC Family Hearing Resource Society. This makes her one of the first deaf friends I’ve met!

Being a year older than me meant she was on her way to elementary school right when I arrived. I soon caught up with her at Langley, Canada’s Uplands Elementary in the fall of 1987.

There were other deaf students at Uplands, but I remained the only mainstreamed kid in my grade until Erin showed up on the first day of Grade 3. To be more precise, the first time we met was on the set of Sharing Secrets which was filmed the summer before. (If you click on the link, she’s the one second from left in the photo. We both had short blonde hair, but I was the bang-free version.)

We became permanent classmates and went through grade 3, 4, 5, 6, and 7 together. Throughout grades 8-12 at Mountain Secondary, Erin and I were yet again paired together for most classes. We had Alayna’s company in-between classes for all but our last year at Mountain.

During our years at Uplands, we sat through classes that were taught by hearing teachers and interpreted by Special Education Assistants with varying degrees of signing skills (mostly poor). Even with between 15-25 deaf students enrolled in the school, Uplands somehow could not manage to hire even one deaf teacher.

Although the deaf program at Uplands was poorly run, many of the deaf students, ourselves included, came from a privileged background. Other families in the Township of Langley must’ve been concerned about there being something in the water what with there being so many deaf kids in the area. In reality, many families with deaf kids relocated to the school’s neighbourhood so that we, the kids, could have a vaguely normal social life. It was almost as if Uplands was the private school of the BC deaf community.

I didn’t move into the area until I was 12, but it was hugely beneficial to me to be able to hang out with Alayna, Erin, and other deaf friends after school and on the weekends.

A remarkable thing the three of us have in common is that we had two hearing parents who signed. This is sadly unusual.

I did not know very many deaf kids outside our Langley circle until high school. At that point, I started meeting residential students who would only see their families on weekends. Many of them had parents who didn’t sign at all. Many struggled with literacy, even if English was their parents’ primary language. Worst of all, they were willing to accept the limitations that were imposed on them by hearing people.

It took years before I understood what really factored in our success. What I mean by success is that the three of us are fully bilingual; we are able to communicate in ASL and in written English. We definitely don’t let hearing people decide what our limitations are.

It was early language acquisition. This was the core, with layers of support from the deaf community, (mostly) accessible education, and, yes, two signing parents. Our parents were receptive to having us try out assistive devices such as hearing aids, hearing aids attached to personal frequency modulation, and even the goofy-ass vibrotactile amplification system (as modelled by me in this #TBT Instagram post). Some of these resources were costly, but our families were able to afford it.

We did not deserve any of these advantages more than the rest of the young deaf community. We had it relatively good, but a lot of things could and should have been better. Alayna and Erin are now using their privilege to give the newest members of our community the best start through the Lila & Pip program.

Finally, if you’ve made it this far, please go even further by supporting Lila & Pip with a visit to their merch store!

2 thoughts on “Nothing about us without us.”